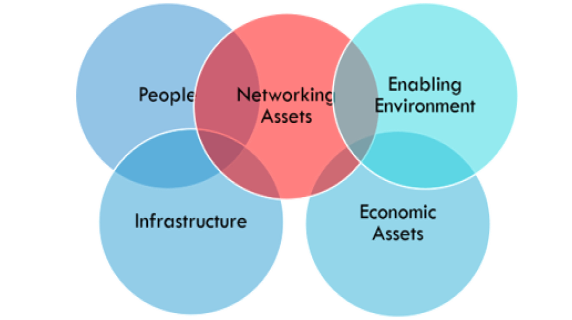 The term ‘ecosystem’ in a business context was coined by Moore (1993) in an article where he argued that businesses do not evolve as isolated entities but develop through interaction with suppliers, financiers and customers.

Stam (2015) proposed entrepreneurial ecosystems are “a set of interdependent actors and factors coordinated in such a way that they enable productive entrepreneurship”.

An Entrepreneurship Ecosystem is ‘a set of interconnected entrepreneurial actors (both potential and existing), entrepreneurial organisations (e.g. firms, venture capitalists, business angels and banks), institutions (universities, public sector agencies and financial bodies) and entrepreneurial processes, which formally and informally coalesce to connect, mediate and govern the performance within the local entrepreneurial environment’.

Entrepreneurship Ecosystems facilitate the creation of environments conducive to collaboration, synergy, networking and internationalisation. They further encourage and spur innovation. Evidence shows that domestic and foreign investors are attracted to sectors with strong entrepreneurship ecosystems, such as tech and innovation.

Inspired by research on the importance of entrepreneurship for sustained economic growth and improved well-being, many governments and non-governmental grant-making organizations have sought over the past decade to implement policies and programs intended to support entrepreneurs.

Over this interval, growing appreciation of the limits of strategies focused narrowly on financing or training entrepreneurs has prompted a number of such entities to shift their efforts toward more broad-based strategies aimed at enabling “entrepreneurial ecosystems” at the city or sub-national regional scale. “Enabling the Entrepreneurship Ecosystem-Philip E. Auerswald, October 2015. Ewing Marion Kauffmann Foundation”.

For entrepreneurship and innovation to play the crucial role that they can in creating significant value, employment and growing Sierra Leone’s economy, we need to develop a new breed of entrepreneurs – disruptive, value-creating and high-growth entrepreneurs, ‘Productive Entrepreneurs’.

Individual entrepreneurs and innovators in Sierra Leone by and large face three options: Seek economic rents within the status quo; challenge the status quo though disruptive innovations; or leave the society altogether to seek an environment more welcoming to economic creativity.

These new entrants are off a particular type; Schumpeterian Entrepreneurship. These are Sierra Leoneans that are disrupting existing business models; they are operating in very uncertain times; they see the value of technology; they are not rent seeking but yearn to create value that is consistent with your own values. They operate, nonetheless is an environment that is characterize by high cost of communication and internet; with meagre human resources in the tech space; and with a nonexistent entrepreneurial ecosystem. Yet the capacity of these entrepreneurs to innovate is just as strong as similar entrepreneurs in other parts of the world.

We celebrate disruptive entrepreneurs in Accra, Nairobi, Kigali and Johannesburg. Yet, in Sierra Leone we have entrepreneurs that have built robots; design and developed a face recognition software; have create services utilizing drone technology and even ideas of 3D printing of agriculture equipment and small machinery.

What is lacking for these entrepreneurs to move these ideas from seed to start up and eventually growth is a platform that contains channels and nodes. This platform is an entrepreneurial ecosystem.